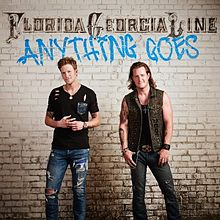 Anything Goes is the second studio album by American bro-country duo Florida Georgia Line. It was released on October 14, 2014, by Republic Nashville. The release of the album was announced August 15 from Central Park in New York City on Good Morning America. The album was produced by Joey Moi. Its first single, “Dirt”, peaked at number one on the Billboard Hot Country Songs chart.